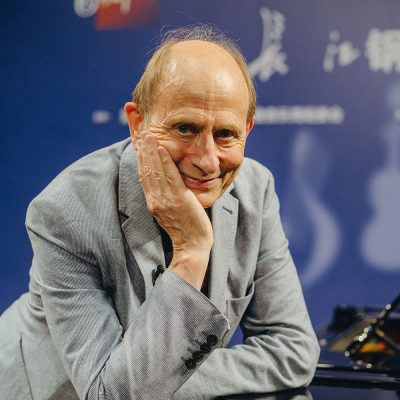 Christopher Elton was born in Edinburgh and received most of his musical education at the Royal Academy of Music in London, where he achieved the unusual distinction of gaining the Academy’s highest performing award – the Dip. RAM – on both piano and ‘cello.

While his priority has long been to his work at the Royal Academy, London, Christopher Elton has recently accepted an invitation to join the piano faculty at the Yale School of Music as a Visiting Professor for the 2nd semester of 2017/2018. He is also much in demand overseas both as a teacher and as a jury member for international competitions. Within the last few years he has given masterclasses in the USA, Japan, Israel, Korea, Australia, Taiwan, Hong Kong, Spain, Germany, Ireland and Vietnam, many of them for important conservatories or universities. He has also been invited as a jury member at many important international competitions – The Cliburn, Moscow (Tchaikovsky), Dublin, Leeds, Busoni (Bolzano), Vienna Beethoven, Shenzen and China International to mention only some. He has also given recitals in the UK, USA, Ireland, Spain, Australia and Vietnam.

He was a prizewinner in several British and international piano competitions, playing and broadcasting regularly both as a soloist and in chamber music. At the same time, he worked as a freelance ‘cellist with the major London orchestras.

Christopher Elton was Head of Keyboard at the Royal Academy of Music, London, (where he was elected a Fellow in 1983,) from 1987 to 2011. In 2002 the title of Professor of the University of London was conferred on him. He now also holds the title of Emeritus Head of Piano, and still maintains a large class of students at the Royal Academy of Music.