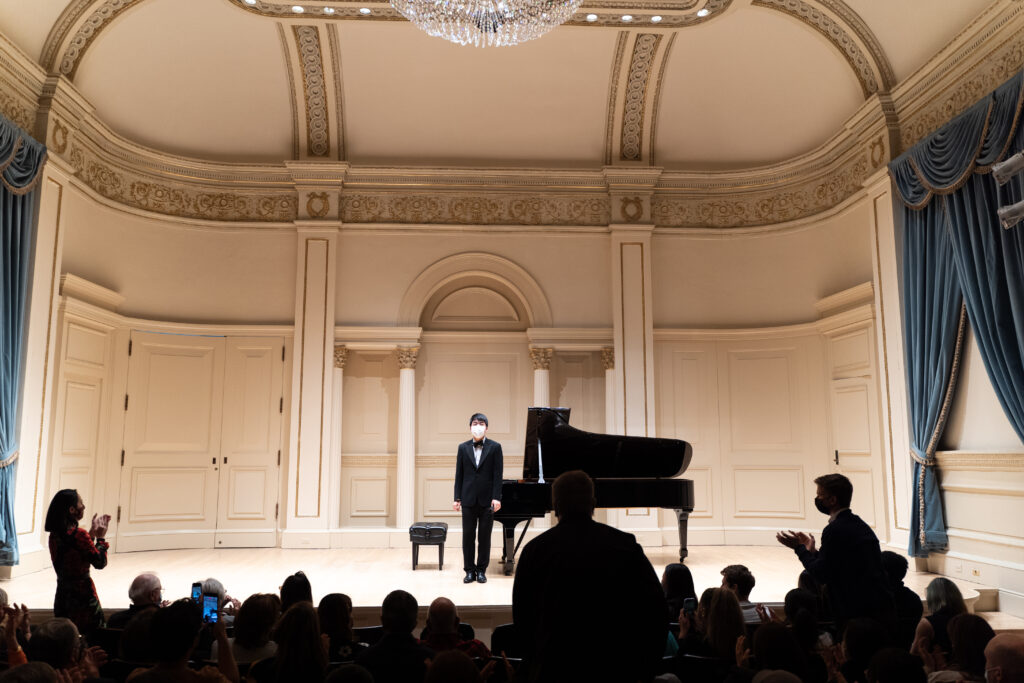 And for Sae Yoon Chon, winner of the 2018 Dublin International Piano Competition, this debut recital was an outstanding success. The Weill Hall, Carnegie, was full to capacity to hear Sae Yoon perform a debut recital that received a standing ovation.

Helena Nolan, Ireland’s Consul General at the UN, and her husband Sami, attended and there was also a strong representation from both the Irish Permanent Mission to the UN and the Department of Foreign Affairs.

Sae Yoon’s mother, Choi, travelled from Seoul for the recital, and also in the audience were his grand-aunt, Okja and family friends.

Professor Bob McDonald, Sae Yoon’s Professor at the Juilliard and DIPC 2022 Jury member attended the recital. The audience also included Zelma Bodzin, DIPC Jury member 2018.  Pavlina Dokovska and Anne-Marie McDermott, both of whom will be on the 2022 Jury also attended.

Speaking after the recital, Ambassador Jongin said ‘My wife and I were mesmerized by his performance shuttling between majesty and subtleness.

Many thanks again for introducing a rising Korean pianist!’

John O’Conor, Artistic Director, DIPC said, ‘it was thrilling to see and hear Sae Yoon Chon playing so magnificently at a packed Weill Hall at Carnegie Hall. Despite having to wear a mask and play without intermission (Carnegie Hall strictures) his recital was a stunning success and a great vindication of his win in Dublin in 2018.’

Professor Bob McDonald said, ‘thank you for the truly wonderful performance tonight, Sae Yoon. Your highly distinctive musical voice brings a wealth of intelligence, imagination and emotional sincerity to everything you play. It has been a genuine privilege for me to encounter your talent and I greatly look forward to the continued opportunity of working together in the future.’

Sae Yoon said after the recital, ‘performing at a Carnegie recital hall was one of my childhood dreams and I was so grateful that the dream came true with DIPC.  I also enjoyed it so much performing to a full house and sharing music with the audiences. It was one of the most memorable concerts in my life and I will remember it for the rest of my life.’

The photo gallery from the event captures the post-recital atmosphere, and the appreciation and delight of the audience members who met Sae Yoon.

Prokofiev Piano Sonata No.8 Op.84 in B flat